As a new edition to the Morality Gin, Black Horse has developed these seven amazing gins that are a must have in any serious gin collectors collection.

All our lables are inspired by Pieter Bruegel the Elder,  Pieter was the most significant artist of Dutch and Flemish Renaissance painting, a painter and printmaker from Brabant, known for his landscapes and peasant scenes.

Pieter Bruegel I (ca. 1525–1569), commonly known as Pieter Bruegel the Elder, was the greatest member of a large and important southern Netherlandish family of artists active for four generations in the sixteenth and seventeenth centuries. A longtime resident of Antwerp, the center of publishing in the Netherlands and a vibrant commercial capital, Bruegel brought a humanizing spirit to traditional subjects and boldly created new ones.

He was an astoundingly inventive painter and draftsman, and, due to the continuity of the family trade and the industry that developed in prints after his works, Bruegel’s impact was widespread and long lasting. Born in or near Breda about 1525, Bruegel settled fairly early in Antwerp, where he became a master in the painters’ Guild of Saint Luke between 1551 and 1552. 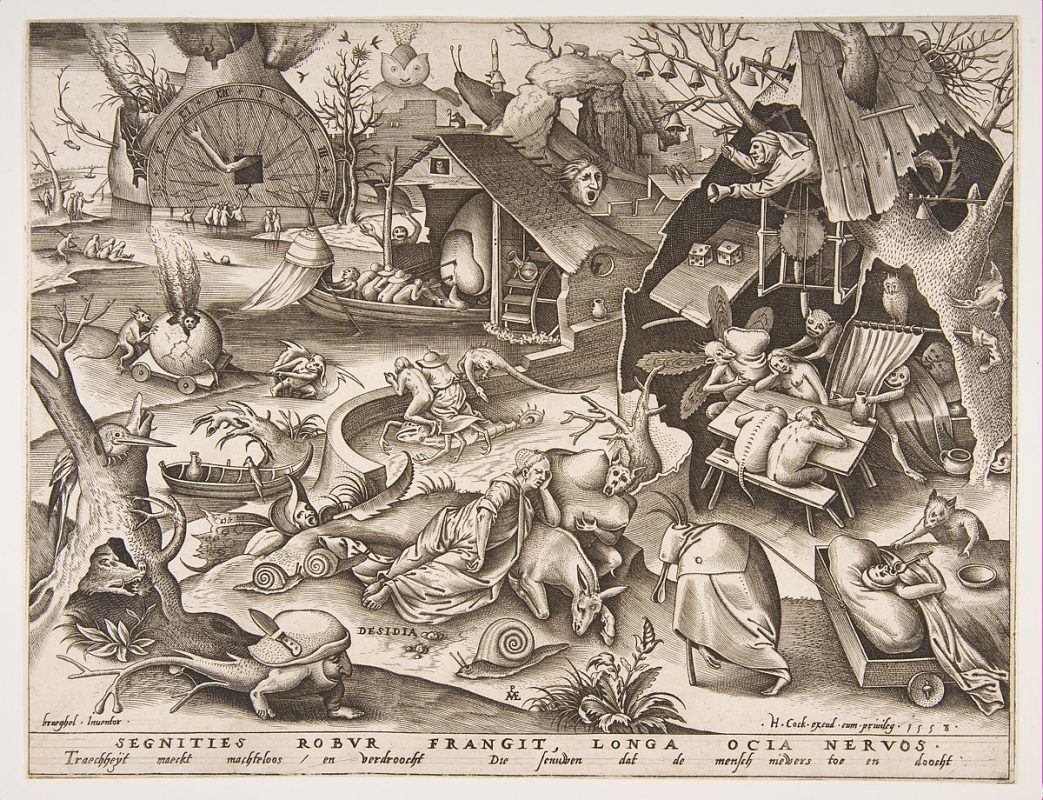 Sloth (Desidia), from the series The Seven Deadly Sins 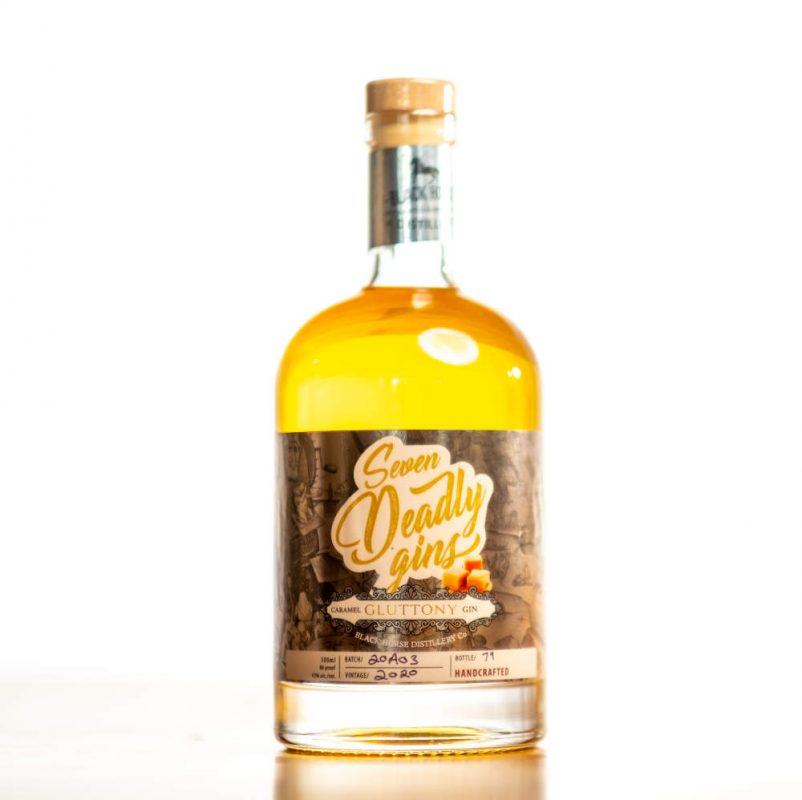 It is important to encourage gluttony in all its forms. This caramel gin is pure self-indulgence with a buttery caramel flavour and a bitter Juniper ending.

“Curiosity is gluttony. To see is to devour.”  ―  Victor Hugo, Les Misérables 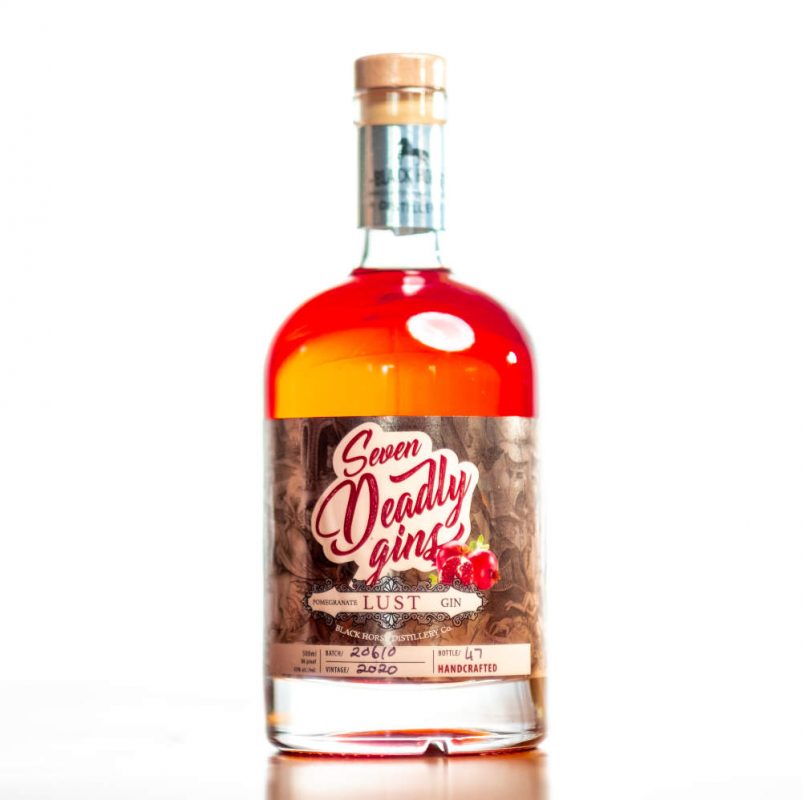 Some historians believe the Pomegranate was the tree of wisdom in the Garden of Eden, symbolically linking the fruit’s garnet flesh with temptation forevermore. Every bottle of Lust is enchanted with the fruit of lust and distilled and bottled by hand, vapor-infused with Juniper berries, pomegranate arils, and a range of other botanicals. The greatest floral gin for the lustful connoisseur. 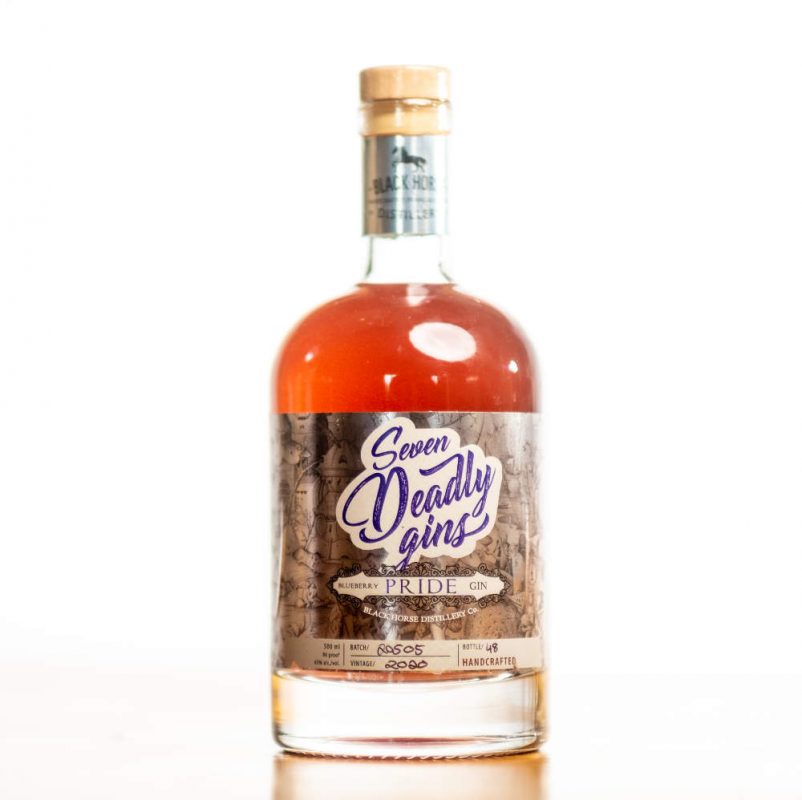 Violet Beauregarde for her sin of Pride, turned into a giant blueberry. This Black Horse Blueberry Gin the original and most serious of the seven deadly gins might just turn you blue with conceit.

Every bottle of Pride is distilled and bottled by hand and steeped-infused with fresh blueberries and Juniper. 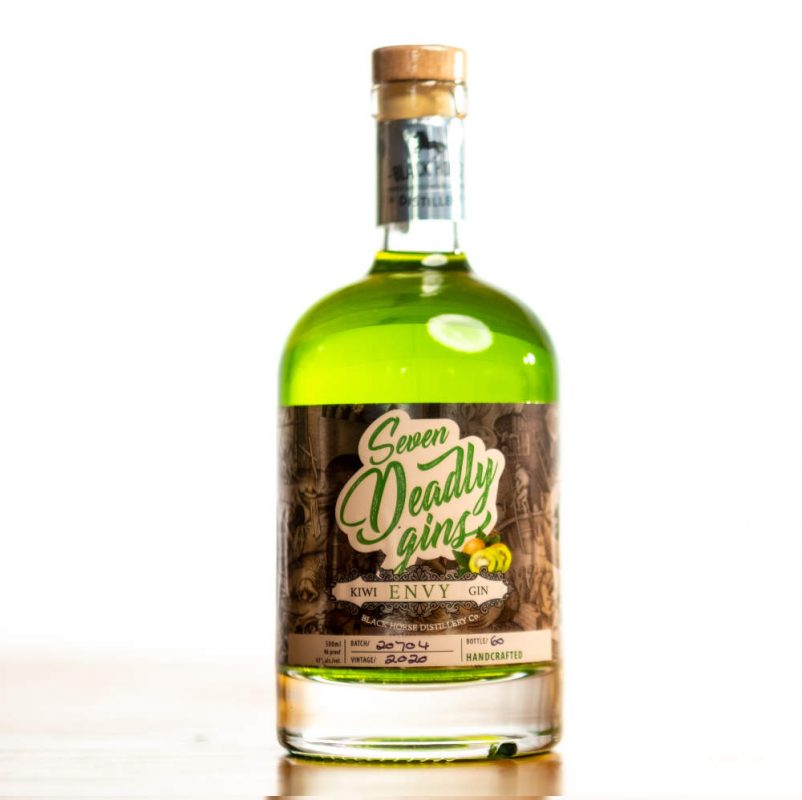 This cheeky gin is full of Kiwi and Lime, a fresh summers gin. “Envy eats nothing but its own heart”, this is truly a bottle full of regret. 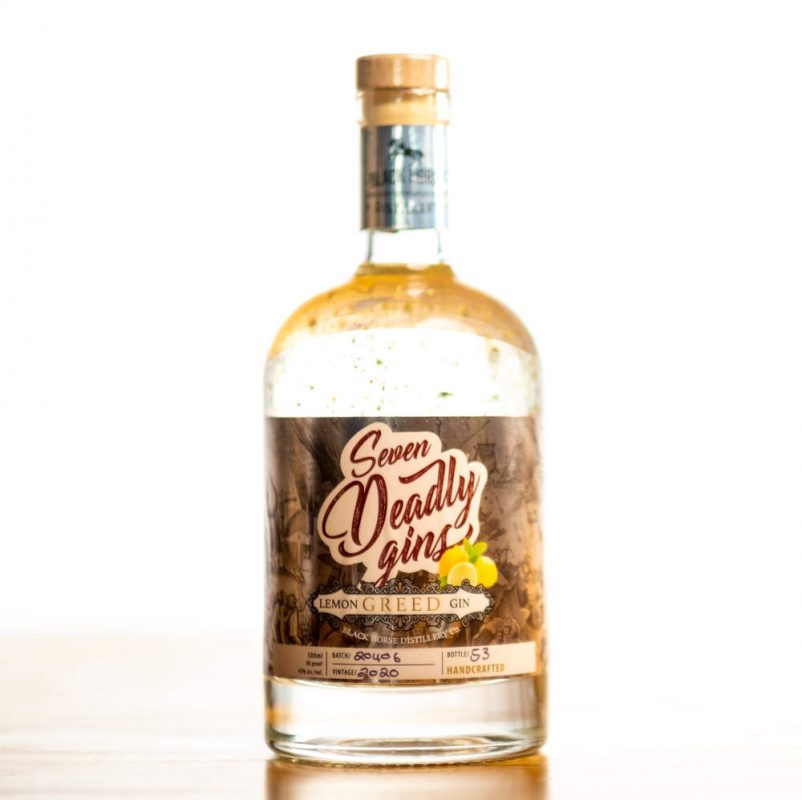 We have bottled fame, brewed glory, and even put a stopper in death. This rich gin infused with Juniper Berries an abundant amount of Lemon Peel and thirteen other spices will exalt your greed with a dash of pure 24-carat Gold. You don’t have to share this one, you greedy animal. 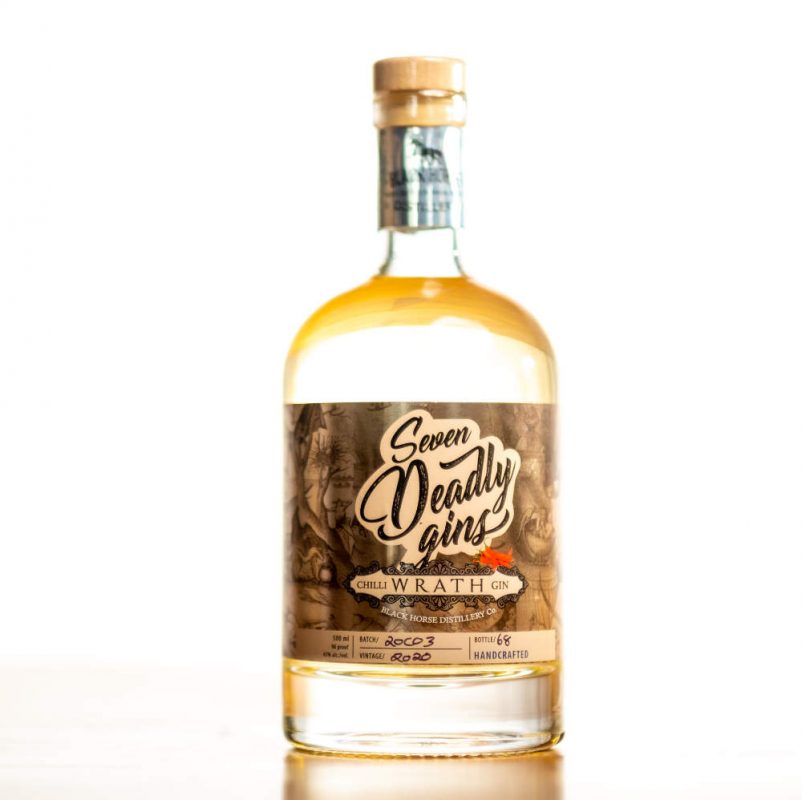 “But of the seven deadly gins, wrath is the healthiest – next only to lust.”

This remarkable gin infused with chilli will enhance even your darkest taste with a warm glow of vengeance. 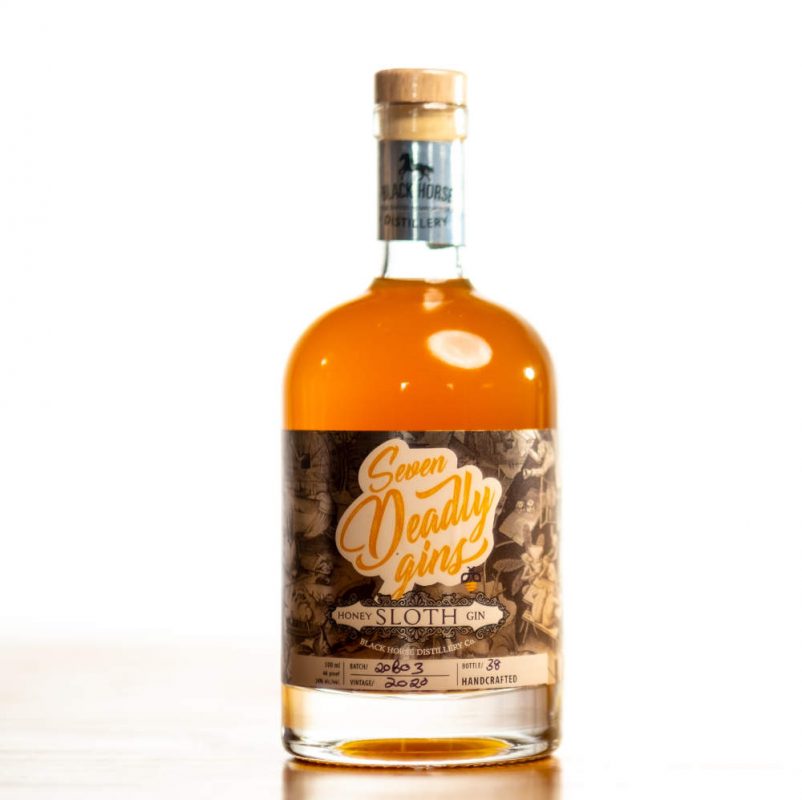 A gin that does not want to do too much. The laziest gin ever created a perfect sipping gin liqueur for that cold and lonely nights, with notes of honey and butterscotch. 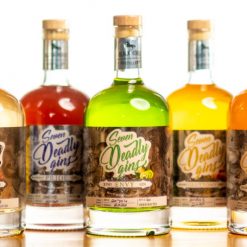 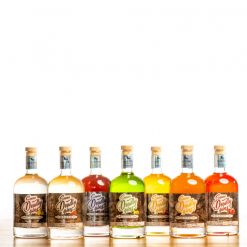 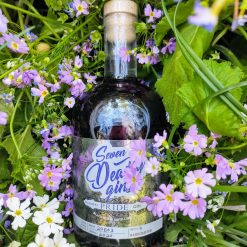 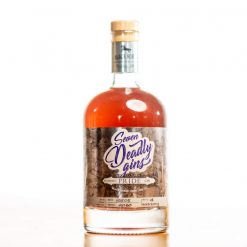 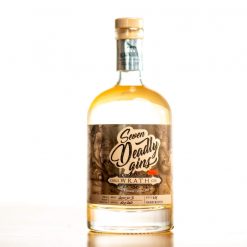 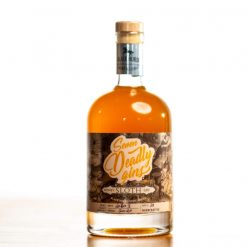 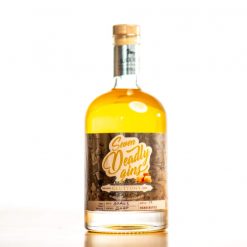 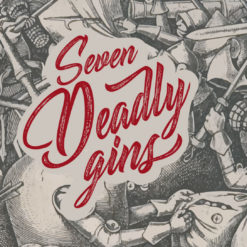 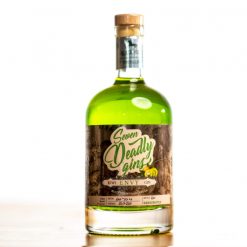 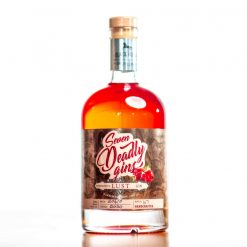 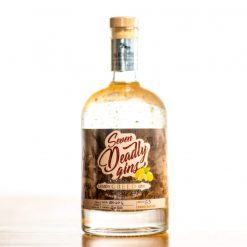